The nagging problem stems from the way one would experience curvature if they truly lived on a ball.  All the current methods of finding curvature don’t really have a good explanation and upon further study are shown to be calculating something other than curvature.  So what do we mean by curvature?  I will answer this question and provide a new and rational equation for curvature and show why the other equations do not work.

This famous document that has made the rounds in the flat earth community is not so much incorrect as it calculates an irrelevant number.  Though it does properly calculate the value for X (or the “drop” along the axis), X is not the value we are looking for.

As you can see, the line X is tilted so it is parallel to the axis.  This is where the calculation becomes misleading.  What we really need to do is extend the line in order to intersect the line of site projected from point 0 (in the Ball Earth Map document).  Please see my curvature image to see an example of this. 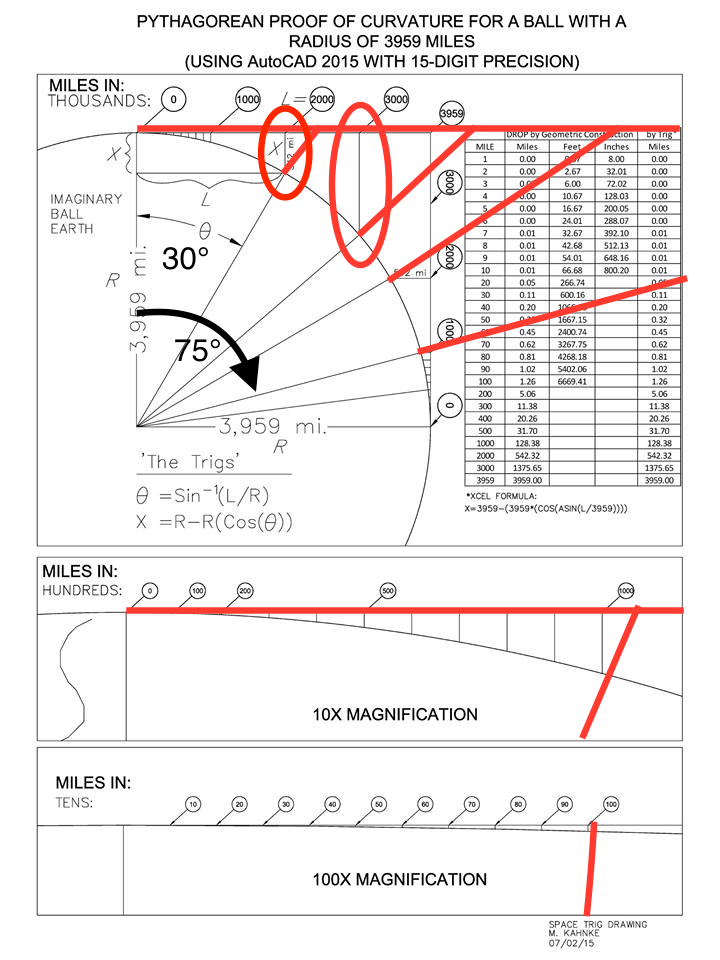 The equation “distance² x 8 inches / 12” does not solve for curvature but only for the hypotenuse of the distance: “Height = R-R*(cos(θ))” and “Length = sin(θ)*R”.  Since these two values only represent the length and height of the distance travelled along the hypotenuse; and, since you cannot have a circle without height and length of equal value, you cannot have an arc without height and length of unequal value; therefore, curvature cannot simply be height (or the amount of “drop” along the axis) nor the value of the hypotenuse.

As an example, 1° of circumference is equal to 24901/360°=69.1 miles.  If we plug in that value to the equation we get “√((3959-3959*(cos(1°))² + (sin(1°)*3959))² = 69.09 miles.  This is not the value for curvature.  However, this does resolve the hypotenuse.  The equation was being used to measure curvature by plugging in the arc distance (the distance travelled along the ball) not the hypotenuse; therefore, the resultant value will only solve the value of the hypotenuse.  All we are calculating with this equation is the point at which two different lines of site intersect on a ball not the height required for an object to be visible from point A.

Two points would intersect if we “forced the line” and built along the ground from each point (A and G).  The two lines would have to be 3959 miles long.  This is equivalent to a building at point D being 1639 miles in height.  Since we build either along the surface or perpendicular to the Earth’s surface (i.e. buildings), we need to calculate something else.

Line of Site, the Hypotenuse and θ

So what are we actually trying to calculate?  If the hypotenuse is not the distance nor the length along the axis, then what is?  The confounding problem is related to the line of site of the observer.  Once we establish the position of the observer, all the other pieces fall into place.  If you examine the image below, you will notice that a line of site moves away from point A towards infinity.  So we need to take the observer as being at point A and does not move.

Next, several dashed lines at various degrees have been drawn until they intersect with the line of site originating at point A.  The equation ((1/(COS(θ)/R))-R) calculates the hypotenuse from θ to the point at which it intersects with the line of site from point A minus the radius.  What we are calculating is the height necessary for an object to be above the surface, at a particular arc distance away or at angle θ, in order for it to be visible to the observer at point A.  This is the key.

As an example (if the ball theory is to work), as a ship goes over the horizon, the mast (and the rest of the boat) will begin to tilt as per angle θ.  Though this is a tiny angle at first, it nonetheless must follow that angle.  The mast does not start tilting back to stay parallel with the axis of the ball, it stays fixed to the boat.   As the boat continues along the circumference, the mast would need to extend in height to remain visible to the observer at point A.  This is an effect of curvature.

In the diagram below, I put the original curvature calculation beside the equation I have proposed.  You can see that at smaller distances the two values are very similar.  However, as you move past 2° the values begin to diverge more rapidly.

A simple way to calculate the “distance to horizon” is to divide the distance travelled by 69.17 miles which equals θ and plug that into ((R/(COS(θ))-R)=Cur.

So what do we mean by curvature?  For example, if I travelled from point A to G, I would have experienced 6225 miles of the total circumference but there is not 6225 miles of curvature between point A and G.  If you look at line D1 – D0, you will see that there is only 1159 miles of arc height (or the maximum height of the arc between two points).  It also happens to be the value of X at 45° or 90°/2.  This works for any arc length.

If you know the distance travelled, you can calculate the equivalent θ travelled.  Using a variation of the Ball Earth Math equation, R-R(COS(θ/2)), we can solve for X which gives us the maximum height of the arc.

At a distance of 6225 miles (or ¼ of the globe) the maximum height of the arc has been shown to be 1159 miles.  In a similar fashion, the ship and the observer would have to lift off the surface at 45° and travel for 1159 miles to see each other.  However, we can see that all this is doing is altering the line of site for both the boat and the observer.

The definition of curvature is the degree to which a curve deviates from a straight line, or a curved surface deviates from a plane.  The curvature of a circle is defined mathematically as the reciprocal of the radius (ie. κ = 1/r).  All this tells us is that as the circle becomes larger κ becomes smaller.  This does not help us figure out what the effect of curvature is to a person living on a ball.

However, by showing rational examples I have demonstrated the effect of curvature is the height necessary for an object to be above the surface, at a particular arc distance away or at angle θ, in order for it to be visible to the observer at point X.  Without altering the line of site of the observer and keeping the object (in this case a boat) on the surface of the earth, we can measure the effect of curvature.

I would propose then, that what we are looking for is effective curvature and it is defined as “The height necessary for an object to be above the surface, at a particular arc distance away or at angle θ, in order for it to be visible to the observer at point X and X being a stationary position.”