My previous post “How ascending planes debunk the globe – part 2” describes, using simple trigonometry, how the ascent rate of an airplane is impossible on a globe.  The rebuttal to this was that the airplane somehow still “follows the curve” while ascending. However, an airplane cannot simultaneously “follow the curve” which requires the trim to be constantly in the upward position (Nose-Down), while at the same time ascending which, requires the trim to be in the completely opposite position (Nose-Up).

Therefore, during take-off and descent, the total amount of curvature that SHOULD be accounted for by the trim is non-existent.  Just take some time and think about that.

What, exactly, is trim or the trimming of an airplane.  This is from Wikipedia:

The use of trim tabs significantly reduces pilots’ workload during continuous maneuvers (e.g. sustained climb to altitude after takeoff or descent prior to landing), allowing them to focus their attention on other tasks such as traffic avoidance or communication with air traffic control.

Both elevator trim and pitch trim affect the small trimming part of the elevator on jet airliners. The former is supposed to be set in a certain position for a longer time, while the pitch trim (controlled with the landing pilot’s thumb on the yoke or joystick, and is thereby easy to maneuver) is used all the time after the flying pilot has disabled the autopilot, especially after each time the flaps are lowered or at every change in the airspeed, at the descent, approach and final. Elevator trim is most used for controlling the attitude at cruising by the autopilot.

As you can see, once the elevator trim is set, it is rarely adjusted by either the autopilot or the pilot.  Even if we allow for the trim to be constantly adjusted, it is not designed to nor does it ever “constantly adjust for curvature”.  However, if we assume that curvature does exist, to satisfy those who insist on curvature, then the trim would have to account for it.  You can’t have one without the other folks.

Here is the curvature math and geometry:

This is because a curve is a non-linear shape that requires a constant change in pitch to maintain a constant altitude and thereby “follow the curve”.  For each change in pitch, the trim must add each subsequent change to maintain the non-linear shape.  I’ve used the curvature math above but also included the speed of the aircraft to calculate “Instantaneous curvature” – or how much curvature must be accounted for over a certain period of time and velocity.  Assuming an aircraft with a velocity of 500 mph, the amount of curvature increases by 0.309 inches / second.  This might seem like an inconsequential value at first however, this is an accumulative value that increases over time.  For example, after the first 30 seconds, the amount of curvature that the trim would need to adjust for is 10 feet.   After 760 seconds (12 minutes), the trim needs to adjust for 1.41 miles of curvature.  If the trim is constantly adjusting for curvature, then no drastic motions would be felt by passengers and crew.  However, this would cause the trim to be in an impossible state after just a few minutes of flight.  But this is somewhat of an academic exercise since neither pilots nor the autopilot adjust the trim in this fashion.

This question was posed to a pilot in a forum and part of his answer was:

You said that, if the plane was trimmed for a straight and level flight, it would ‘gain altitude’ while flying as the earth surface ‘fell away’ due to the curvature of the earth. Well, that would probably happen in a perfectly motionless atmosphere where the plane would fly dead ahead, and over time gain altitude (provided it has sufficient thrust) as the earth curves away from under the airplane.

In reality, a constant altitude must be kept using the standard pressure and that means a fixed distance to the earth center of gravity is maintained, making the path of the plane a curved one.

Even the pilot acknowledges that the aircraft would “…gain altitude over time” if the trim was set.  He follows up saying that “In reality…” this does not happen.  Instead of saying to himself, “Humm…that contradicts the spherical hypothesis of the globe, maybe it’s wrong”, he evokes “gravity” and “standard pressure”.  But neither the “standard pressure” nor “gravity” can fix this conundrum since the trim must continually be altered to “follow the curve” and we shall see in a moment, “gravity” is not the answer either.  He talks about the trim by saying:

As such, the flight controls are constantly moving very subtly to maintain the correct attitude.

I would agree but he’s not applying a spherical model to the response, only a flat surface model.  If he was flying over a sphere, the trim would have to adjust every second. 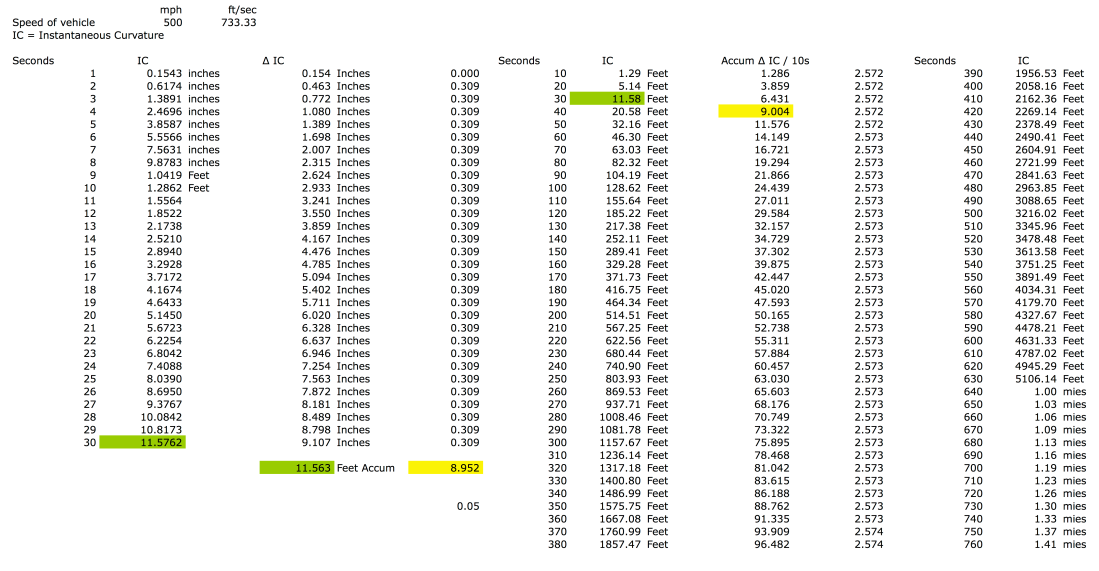 Here is the formula used:

How should an aircraft maintain altitude on a sphere?

For every 69.1 miles of flight, a 1° change in pitch must take place.  If the pilot makes only a single 1° change in pitch over a 500 mile trip (a total of 7.2° of pitch change) then the airplane will be 6.2° off of level.  A single 1° pitch change from a particular starting position produces a slope not a curve.  To maintain a curve, the pitch change MUST increase with time.  So to travel 6,219 miles on a sphere, the trim of the aircraft would have to account for 90° from the starting position.  This is regardless of gyroscopes or accelerometers.  Unless the aircraft “follows the curve”, it will increase in altitude and to “follow the curve”, the trim MUST be in a constantly increasing, upward position.  No pilot would ever adjust the trim to such a degree since it would cause a major imbalance in the aircraft.  In other words, this could not happen nor does it happen because we don’t live on a sphere, rather, it is indicative of a flat surface.

if a pilot or autopilot had to change pitch to maintain “level” flight (by pushing forward on the column or modifying the trim) the pilot or autopilot could not nor would not pull back on the column nor put the trim back to the original position once the adjustment was made otherwise, they would continue to fly in a tangent to the surface of the sphere and subsequently start gaining altitude again.

Again, any pilot would tell you, the trim is not continuously adjusted for curvature nor are they continuously pushing forward on the column.  The point being that once trim is set to a particular level (especially the elevator trim), it is left alone.  This totally contradicts what should happen on a sphere but is complete what we would expect on a flat surface.

Gravity to the Rescue!

Now some of the globe folks (including pilots) will evoke gravity to fix this rather intractable problem.  However, to evoke gravity at this point and say that, “IT keeps the plane level”, is to ignore the obvious: the aircraft has already overcome the supposed effects of gravity otherwise it could not be in flight – Even NASA agrees.

Weight is a force caused by the supposed acceleration due to gravity and the lift forces have already overcome the weight of the aircraft and thereby, gravity.  Level flight is, either by line-of-site (i.e. pilot flying level to horizon) or via the gyro, not due to gravity.  However (and for the sake of argument), if gravity was responsible for level flight on a sphere, by constantly forcing the aircraft level (or tangent to the sphere), then the ability of the aircraft to ascend or descend would be impossible since it could never increase it’s angle of attack from level.  This, of course, does not happen in reality.

For example, the gyroscope is known for its ability to maintain rigidity in space and provides empirical evidence for a flat surface rather than a sphere.  However, the subscribers to the spherical model say that the gyroscope is modified during flight to account for the change in pitch.  There are several problems with this.

1) The aircraft MUST “follow the curve” regardless of what the instruments say or bad things will happen.

2) To “follow the curve” a real change in pitch MUST happen.  It cannot be ignored by modifying the gyro.

4) A small aircraft, like a Cessna, does not modify or have the ability to modify their gyros during flight (i.e. Schuler Tuning) which debunks the notion that this happens with larger, commercial aircraft.  But even if we allow for that, it doesn’t fix the problems with the spherical model as has been explained.

View all posts by Gabriel Gray

This site uses Akismet to reduce spam. Learn how your comment data is processed.